Last October at the Episcopal Church of All Saints in Indianapolis my partner of 8 years and I were married. Or not. It's a little confusing.

I mean, there were rings and flower girls and a huge party and a photographer and heaven knows it was expensive. But absent from the service leaflet were the words "wedding" or "marriage". Instead the service was the "Witnessing and Blessing of a Lifelong Covenant". When we signed the big book, it looked like a wedding register, but taped over the word "marriage" was a little slip of paper reading "lifelong covenent". 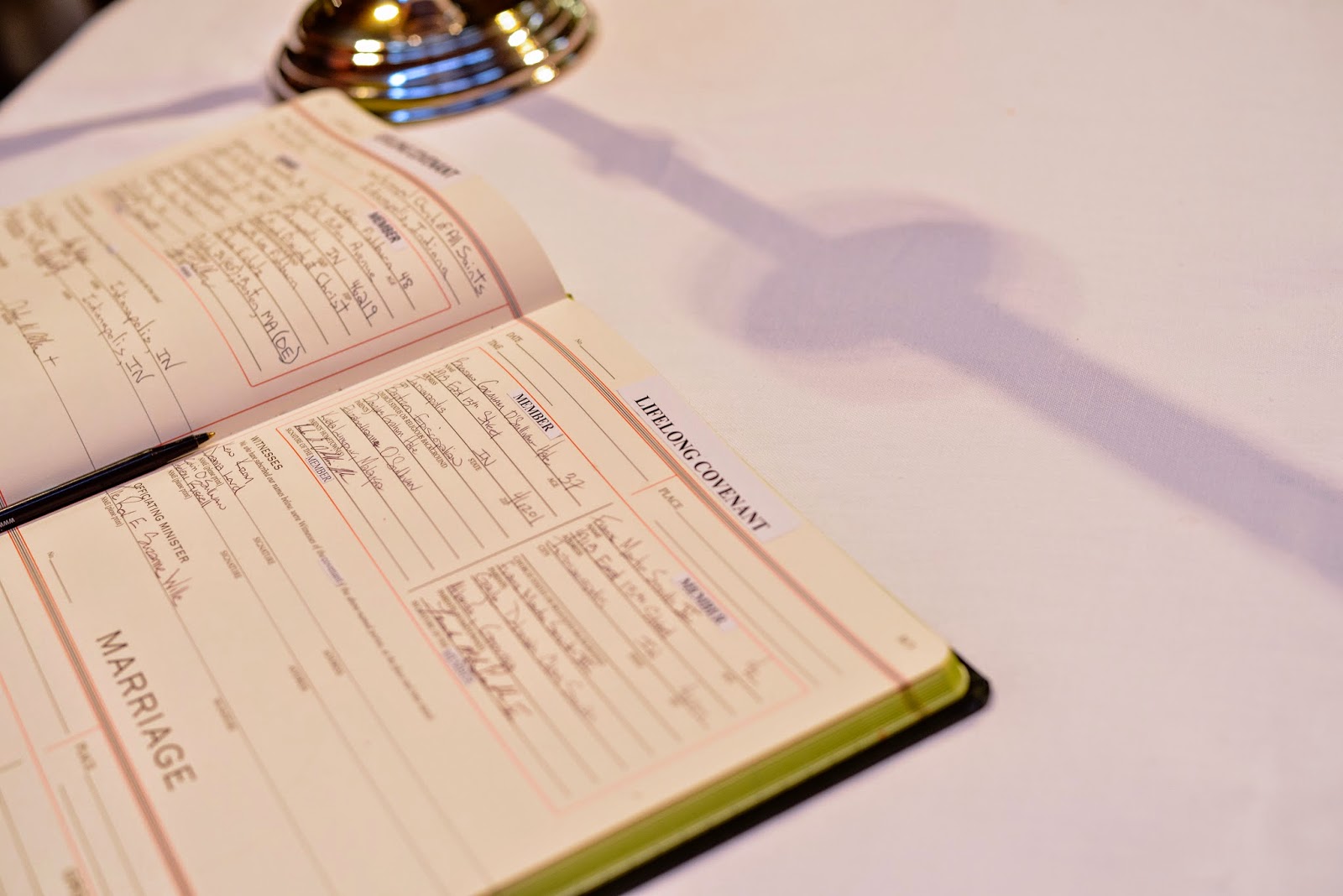 Back in the day, when I was a bit more of a firebrand, I used to say there was no way I would get married in the Episcopal Church until it was truly recognized as marriage. Government recognition be damned - as important as it is I mostly never cared what it thought as long as in the eyes of the church my family was really, truly equal.

Instead, the government got there first, and Frank and I walked down the aisle in Indiana, a state that most definitely does not recognize our marriage, while legally married some months earlier in the state of New York, to receive from our church the Sacrament of Marriage Witnessing and Blessing of a Lifelong Covenant.

And to some, insulting. I get that. But not for me.

The mission of the church, as expressed in the catechism in the Book of Common Prayer, is to "restore all people to unity with God and each other in Christ." It is awfully hard to do that as a divided body. Our prayer book clearly recognizes this, including a prayer for Christian unity that asserts that we are in "great danger from our unhappy divisions" and goes on to ask that "we may be all of one heart and of one soul, united in one holy bond of truth and peace, of faith and charity."

I would venture to guess that a large part, if not the majority, of those involved in the composition of the liturgy for the Witnessing and Blessing of a Lifelong Covenant and the theological reflections that accompanied it would in fact support the church's recognition of the sacrament of marriage for same sex couples. I don't blame them for coming up with something different: that was not the charge the 2009 General Convention gave them.

Particularly given where so many states are today, there are some who regard the same sex blessing rite as a timid half measure - a creature of politics designed to avoid overstepping the sensibilities of some in the church in the name of preserving denominational unity. And of course that is what it is. But that isn't only what it is.

The Holy Spirit desires unity for all of us. That is why the story of Pentecost is more or less the story of the Tower of Babel in rewind. It is the spirit that allows us to tell the Christian story and to be heard. And for each Christian there may be no stories more powerful than the working of God in our life. By taking measured steps, the Episcopal Church has done its best to avoid irretrievable alienation to create time for us to tell our stories to each other, person to person, parish to parish, diocese to diocese.

Some have left, and I'll spend no time here commenting on that other than that it should be cause for sorrow for everyone involved. But many have stayed, and I am no less in communion with the Bishops of Georgia, Northern Indiana, or Alabama - all of whom would in some measure disagree with me on questions related to the possibility of holiness in a same-sex relationship - than I am with the Bishop of Indianapolis. This is because by staying together we have decided not to forestall the possibility of changing. Through the activity of the Holy Spirit we remain in one awkward family, demanding not agreement but remaining in conversation, relying on the bonds of love.

To LGBT people caught in the middle, particularly those in dioceses less friendly than my own, the demands and sacrifices of the present situation may be unjust. In my diocese I am eligible for a not-quite sacrament packaged in a very well-written liturgy. There are many dioceses where that is not available. I don't have a good answer for that.

But in recent years there's a story in the Gospel of Mark that has become one of my favorites:


Now there was a woman who had been suffering from hemorrhages for twelve years. She had endured much under many physicians, and had spent all that she had; and she was no better, but rather grew worse. She had heard about Jesus, and came up behind him in the crowd and touched his cloak, for she said, “If I but touch his clothes, I will be made well.” Immediately her hemorrhage stopped; and she felt in her body that she was healed of her disease.

Immediately aware that power had gone forth from him, Jesus turned about in the crowd and said, “Who touched my clothes?” And his disciples said to him, “You see the crowd pressing in on you; how can you say, ‘Who touched me?’” He looked all around to see who had done it. But the woman, knowing what had happened to her, came in fear and trembling, fell down before him, and told him the whole truth. He said to her, “Daughter, your faith has made you well; go in peace, and be healed of your disease.” (Mark 5:25-34)

This, as far as I know, is the Bible's only example of an involuntary miracle. An woman whose hemorrhages would have made her unclean for many years sneaks up behind Jesus. She does not ask for permission but boldly/timidly claims her blessing. She feels her healing before Jesus acknowledges it.

That's how it will be with many of us for now. If the church decides in 2015 or 2018 that it's ready to declare marriage between members of the same sex a sacrament - great. I hope we do so and I will do my part to make that happen. But this "official" sacrament of marriage is one that I will never receive, because it is already mine. Last October Frank and I touched Jesus's cloak and claimed our blessing. There's nothing second rate about the sacrament we received - even if for the moment the Spirit demands we officially call it something different.

Posted by Brendan O'Sullivan-Hale at 2:31 PM